A Hatchet Job on the Latest Focus 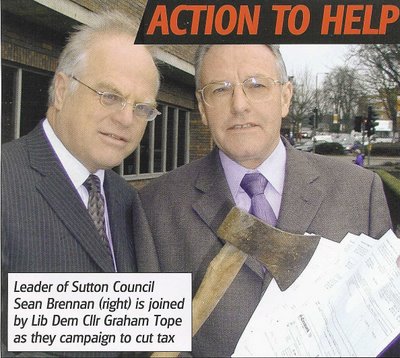 Leader of the Council Sean Brennan is pictured with Cllr Graham Tope in a LibDem newsletter which attempts to justify one of the highest Council Tax increases in London.

Firstly the obvious. Conservative proposals to freeze council tax come as the Council receives £2.3m of unexpected income from HM Revenue and Customs in the form of a VAT rebate dating back to the seventies and from other London Boroughs through changes to the way the Freedom Pass is funded. This money should be handed back to residents. The LibDems are dipping into the reserves themselves. Not to help residents in difficult times, but to build a pet project, the Sutton Life Centre, which no-one in the Borough has asked for. They have provided no detail in how they can afford to keep the place open when it is built next year, thus runnning the risk of creating a millstone around the neck of local people. They are spending £8m on this. Half is coming from a grant, the other half straight from council reserves.

Secondly a quick observation. The fact that Cllr Tope is taking an axe to paper says a lot. There will be a perfectly good pair of scissors in Cllr Brennan’s office in the background, which will be more effective and cheaper. A quick glance at the Council accounts demonstrates that this is an approach that is not just limited to their paper cutting weapon of choice.

I’ve also been supplied with an alternative caption for the photo “Cllr Tope explains the consequences of refusing to pay one of the highest Council Tax increase in London.” Any other captions, comment below.