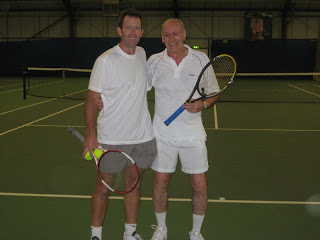 Former British No 1, Jeremy Bates didn’t give Eric much of a chance with his precise hitting, but the aim of this coaching session was to highlight the work of the Sutton Tennis Academy.

The Academy is a jewel in the crown of Sutton, but one that is little known outside the tennis world. As well as providing private membership facilities for residents, it offers so much more to young would-be Andrew Murrays and Laura Robsons through the very best coaching, great surfaces to play on and even in-house education to enable the elite to get the most court time. In fact, home-grown Junior Wimbledon Champion, Laura Robson trained at the Academy herself.

Fellow ward councillor, Eric Howell is fanatical about sport. However, tennis is his passion. Despite literally dying on a tennis court seven years ago after having a heart attack whilst (fortunately) playing a paramedic, he plays hours and hours of tennis every week to a very high standard regularly beating people half his age.

A few councillors went along to watch Eric have a knock-up with Jeremy Bates, the Director of Tennis having been taken on a tour of the place. British No. 3, Josh Goodall was playing former Wimbledon Champion, Pat Cash. On an adjacent court, children from 11 to 18, all among the best in their respective age groups in the country, were hitting ridiculously powerful, low topspin forehands. Playing along this company must give any inspiring child a massive boost in personal development.

It is not all about the elite. Sutton Council helps to fund some of the programmes, increasing participation at all levels of the sport. Cheam High School admits a small number of children each year on a tennis scholarship, adjusting the daily timetable to allow more time playing tennis at the Academy. Not everyone can win Wimbledon, but others will develop into good club coaches and inspire others to pick up a racquet. Sutton has one of the lowest percentages of its residents participating in sport throughout London. This is a good example of recognising that Local Government is often not the best organisation to deliver a particular service. If interests coincide between public and private sectors, we should not be dogmatic. Instead we should move forward together and take such opportunities.