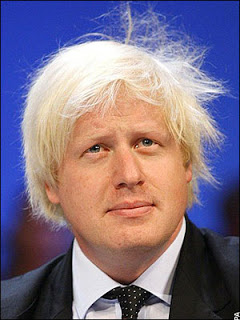 Boris was the highlight of the first day of conference. Sit back with a cup of tea to watch the 16 minute video on the BBC here. As ever, he has a knack of getting some very serious, worthwhile points across in a knockabout, often self-deprecating style. He didn’t disappoint as he bemoaned that his speaking style had been criticised by Arnold Schwarznegger last year. “It was a low moment, my friends, to have my rhetorical skills denounced by a monosyllabic Austrian cyborg,” Boris said. He added “But I can say now to Arnie that in spite of all his doubts and though there was a great deal of suspense until the final reel, Ken Livingstone was terminated.”

He tackled the financial meltdown and crime in the capital with great aplomb before delivering the line that will remain when the jokes are forgotten:-

“There will be no increase in our share of the council tax next year. When times are tough, the last thing people need is for us politicians to be adding to their burden. That is Conservative government in action.”

So, in Sutton whilst the Leader of the Council appears in print to explain why it is right that London Councils should be putting up taxes by 4.7% or more each year, the one part of the budget looked after by a Conservative is to be frozen. As ever, politicians can wring their hands as much as they want. It is only decisive action that will allow efficient running of the administration of the capital to translate into real value for money.