Council Pulls A Fast One Over £8m Pet Project 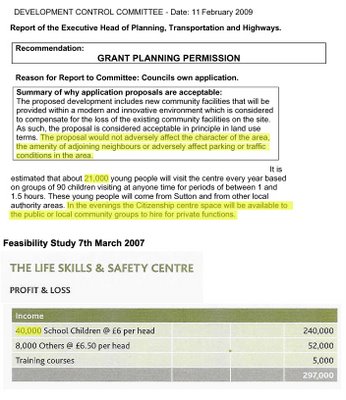 Sutton’s Liberal Democrat town hall bosses pushed through planning permission for the controversial £8million ‘Sutton Life Centre’ last week, following two planning committee meetings. Conservatives have raised severe concerns about the planning suitability of the ‘pet project’ as well as the cost, which has been labelled a “financial minefield”. Approval came at a second hearing after an initial attempt to ram it through late at night at the end of the first meeting.

At the meeting of the Development Control Committee, Conservative councillors questioned the suitability of building the Life Centre adjacent to Sutton Cemetery and Crematorium; the impact on traffic and congestion in the local area; the environmental impact of upwards of 1000 coaches coming to the area; the inconsistent number of visitors due to come to the Centre; and the inevitable noise and light pollution which will emanate from the site, causing disruption to local residents.

Committee member Councillor Tony Shields raised concerns about the climbing wall and the flood lighting which will accompany it. He also highlighted the controversy surrounding the disputed figures for visitor numbers to the Life Centre. A briefing sent to councillors in January stating that the Centre is expected to receive 40,000 visitors per year, a figure echoed in the 1997 feasibility study for the project. In contrast, the projected visitor numbers presented to the committee suggested only 21,000 visitors.

Scant notice was paid to the section of the report which explained that the Life Centre would be available to the public for private hire in the evenings and the problems in Alcorn Close, Barrington Road, Sherborne Road and Thompson Close which will follow.

Conservative Deputy Leader Tony Shields commented: “The Lib Dem-run Council has practically done nothing to consult local people. Additional and unacceptable pressures will be placed on local residents’ parking. Approximately 1000 coach loads of visitors from all round the South East certainly isn’t very green, is it?

“No one has asked for this controversial £8million pet project. The fact is even it’s major Lib Dem supporters have called this project ‘high risk’. They’re shoving Sutton into a financial minefield in a time of economic crisis. It’s now obvious that they haven’t got a clue how many people are going to visit the Centre. The project has been granted permission based on 21,000 visitors but they’re going to need 40,000 to keep it open – doubling the impact on the local area.”