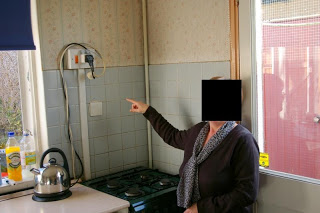 The door has been firmly slammed shut on the Sutton Housing Partnership (SHP) by the Government for much needed investment in Sutton Council’s housing stock. The hammer blow comes after SHP’s failure to achieve the Audit Commission’s ‘Decent Homes Standard’ for a ‘two star’ status last year.

Detailed in a letter to SHP from the Homes & Communities Agency, Sutton Council will not receive a penny in capital funding needed to raise the standard of its public housing, until at least 2011/12. It is the final blow for council tenants after two decades of failure in maintaining decent homes for council tenants, by the Liberal Democrat administration, condemning tenants to more years of misery in poor quality housing.

According to figures from the National Federation of ALMOs (Arm’s Length Management Organisations) Sutton’s social housing is in the bottom 11% of the 69 ALMOs across the country. 50 of the 69 ALMOs set up since April 2002 have been judged as either ‘excellent’ or ‘good’ – this means Sutton has some of the worst social housing in Britain.

Conservative Opposition Housing Spokesman, Councillor Barry Russell, commented by saying: “This is a disaster for Sutton Council’s tenants. Lib Dem town hall bosses have failed to maintain decent housing for council tenants over a twenty-year period. They have nowhere to hide on this issue and tenants are paying the price for their failure.

“By letting our council housing fall into such a state they have condemned Sutton Housing Partnership tenants to more years of uncertainty, living in substandard accommodation.”

Just one of a number of examples of the poor state of housing was discovered by a fact-finding visit of our Housing Policy group members to June Close in Carshalton. The tenant who did not want to be named, is a working mother with two children. The photo shows her highlighting a plug socket located over a gas hob in contravention of basic safety regulations. On top of the mould in her young child’s bedroom and single glazed windows, she could barely keep the flat at a habitable temperature, telling us, “It’s like Russian Roulette with our heating. We had to get it fixed four times since the beginning of this year. In winter we have to sleep downstairs because the house gets so cold. There is a ice-cold draughty from the neglected windows and it’s horrible when it snows. What do we pay our rent and Council Tax for? We love the area and we really don’t want to move but the conditions are appalling.”

The u-turn by the Government is a disaster for Sutton and its tenants. But it is one that has been compounded by a lack of attention from the council over many years. In setting up SHP, lead councillors were more interested in playing politics with the composition of the board rather than the quality of the service delivered to tenants.