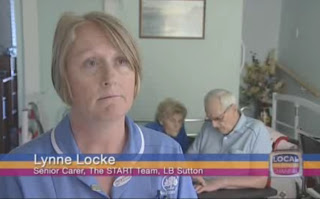 The last of my three trips around the social services in Sutton comprised of three parts. Oakleigh Care Centre has radically changed in the last few years. Care for the increasing numbers of people with dementia would have been limited to having them sit in a day centre just a few years ago. The manger of Oakleigh, Rick, has channeled his energy and enthusiasm into transforming Oakleigh into a place where those suffering from dementia can retain a comparatively high level of independence and certainly a far higher level of dignity that would have been thought possible in the past. Residents have made a groundbreaking film, having been taught to use the equipment, a petting zoo had come over the weekend with sheep and goats taking over the sensory garden and Ollie the pet dog has the run of the place. Actors say never work with children or animals. Dementia specialists go for completely the opposite. I was told of a wonderful example of a resident speaking for the first time in a year when she first petted the dog.

Then to Ludlow Lodge in Wallington. Mainly an intermediate care service, the aim here is to work with residents who have come from hospital, either after an operation or a fall, to recover and regain confidence to return to their own homes. I met a lady who was being shown how to take a cup of tea from the kitchen to her seat using a trolley whilst carrying her stick. This is something that we take for granted. Now look forty years into the future and imagine coming out of hospital having had a gall bladder removed. Helping people back into their own homes is great for the person themselves and good economic sense for the council and the Health Service, meaning that beds can be used for others and scarce money can be better targeted.

Finally the Short Term and Re-ablement Team (START), based next to Ludlow Lodge. Sandra Roche who was my tour guide for the morning has introduced some brilliant entreprenurial ideas into this area. The senior management must be commended for allowing staff the freedom to innovate in this way. The START team will come into people’s homes at an early stage to assess and give the support that the resident needs. Again, the aim is to reintroduce as much independence to their lives as possible, acheiving the ideal balance of improving people’s lives whilst running an efficient department. IT systems are used well to ensure that team members are spending most of their time with residents rather than in the office or on the road. A body of evidence is building up to show quite how much money this is saving the authority.

I accompanied Senior Carer Lynne Locke to visit a family in Beddington. The husband had been diagnosed with a brain tumour. He was born in Burma, so we had a lot in common to talk about, including common family friends. He was at his most passionate though, when speaking about how the carers made him feel. Living through the terror of an uncertain future as well as the physical symptoms that had left him bed-bound, the carers restored a level of dignity. His direct quote, spoken with a tear in his eye, was that they made him feel like a human being again.

Now I hadn’t realised that Sandra and Lynne were stars of the small screen otherwise I would have asked for an autograph, but a short film appears on the Local Government Channel website, where they talk about their excellent service in more detail. Well worth a few minutes of your time.