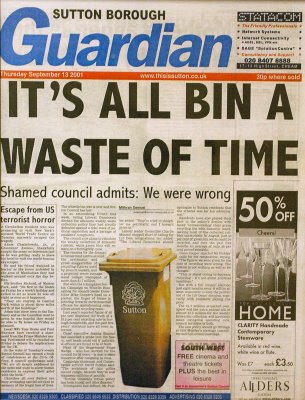 Recently we had the usual back-slapping when the LibDem councillors congratulated themselves having been awarded four stars following a Government inspection. At the recent Scrutiny Overview meeting we considered the detailed report from the Audit Commission who spent a week in Sutton investigating and compiling the report.

I raised an eyebrow when I read that scrutiny in Sutton was generally effective, despite the fact that they sat in on the worst scrutiny meeting that I have witnessed in the two years that I have been on the Council. I wrote at the time that I could see one of the four stars tiptoeing to the door. However, I obviously didn’t allow for the meeting boring the inspectors into submission.

But I nearly fell off my chair when I saw paragraph 59 which says:

“Decision making is clear and well understood by all those involved and underpinned by
a culture of openness. There are appropriate levels of delegation, with officers able to
refer delegated decisions back to members when appropriate. Decisions are reviewed,
and if necessary, changed to reflect the views of the community. For example, the
Council reverted to weekly waste collections following petitions from residents and opposition councillors following a fortnightly collection trial. This demonstrates that the Council listens to the local community to inform its decision making.” (my highlights)

The picture to the right is the front page of the Guardian when the fabled cock-up was reversed. The date is clearly September 13th 2001. Whereas some of the conclusions made in the report can be described as subjective, this example massively undermines the credibility of the inspection. We have had two elections since the wheelie bin fiasco, a resignation and two further Directors of Environment and Leisure. The book “Maggots: A binman’s woeful tale” which may still be available in the Factual section of Sutton Library didn’t document this as a period in the Council’s history that merits a celebration.

The 2001 Guardian article makes mention of the claims of a 45% recycling record, later exposed to be 23.5% at a time when people were being made to separate their rubbish only for both bins to be emptied into the same truck. It left the Council with a £1.7m overspend and an ongoing bill of almost £1.9m pa following the U-turn. Petitions were treated as complaints at the time, meaning that bundles of paper with some 22,000 signatures were considered as one complaint.

Just remember, next time you complain about the Council; it has four stars so it must be you that is wrong! Maybe it’s just me being unreasonable, but this is exactly why I would take evidence that residents are actually happy with the services of the Council rather than an expensive institutionalised inspection regime.