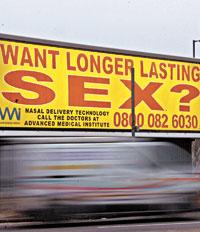 How many near-misses must there have been along the roads of London over the last month or two with the advent of these roadside billboards?

It screams out the bait as if Brian Blessed had been the copywriter but the product that it is marketing is hidden in the lurid colours and the sheer size of the provocative text of the question.

According to the Sunday Telegraph, they have been removed voluntarily by the firm behind the advertising campaign after the Advertising Standards Authority dithered following a string of complaints. I don’t consider myself prudish but the posters that were on Beddington Lane and Carshalton Road were ugly and just daft, playing on a base schoolboy sense of titillation. As do most people, I get enough spam in my inbox about sex, viagra and plenty of other things, I really don’t need it while I’m away from my emails for a while relaxing in the traffic on the red route. I could say that it gets up my nose, but since this product is a nasal spray that it is claimed cures impotency, I’ll rely on a judgemental shake of the head.

Anyway, the people who I feel sorry for are those who live opposite the posters who must have to look out of their bedroom windows everyday before they go to bed and when they get up to have the same question being posed of them. I’m not sure if Brian Blessed has considered retraining as an Agony Aunt.