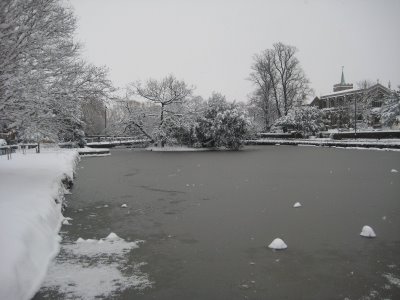 First the news. I’ve had an update from the Council about various services.

51 schools are definitely closed. The remaining 9 are being contacted.

Staff in Adult Social Services are prioritising the most vulnerable and are ringing around and visiting where possible.

Waste and Recycling Services have been cancelled today. Staff who would have been collecting rubbish have been reassigned to clear the worst of the snow.

Gritters are on the main roads and were out last night. There seems to be different levels of success around the area. Carshalton High Street is passable whereas nearby Brookside is knee deep. The Brighton Road in Sutton was ungritted as of 8.30am and reports have come in about 14in of snow on the roads near Cuddington.

Parking enforcement has been lifted. The reason that we were told was worry for the safety of traffic wardens. I would have thought helping residents in a difficult time would have been up there in priorities and the small matter of yellow lines being buried under a foot of snow. Anyway, the advice is not to travel unless you really have to…but you’ll be able to park when you get there.

I walked around Carshalton this morning. People were walking along the side roads with very few cars on the roads. I was amazed how many people were out and about enjoying the snow and delighting in the peaceful beauty around Carshalton Ponds. The atmosphere was of another age gone by. One of the ponds was frozen over which meant that the birds, swans and ducks all crowded into the other pond. Children have been using lengths of guttering for skis, plastic bags for toboggans and snowballs for …well, weapons.

Latest weather forecast
Frequent snow showers this morning with a longer period of snow this afternoon and at first this
evening. Further falls of 5 to 10 cm are possible with a risk of isolated falls of up to 15 cm. The snow may turn more sleety later this evening before dying out. Frosty overnight with widespread ice.

For tomorrow –
Icy at first. Risk of sleet or snow showers later in the morning and through the afternoon. These should die out overnight. Frosty again with a risk of icy patches.