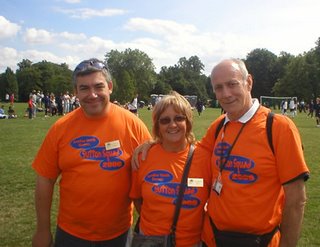 Last weekend, Crystal Palace hosted the London Youth games. Our very own Eric (on the right), in his role as Group spokesman for Sport took Cllrs. Tim Crowley and Moira Butt along to support the Sutton contingent and a good time was had by all. Eric spent the entire two days chatting to the kids, helping with the organisation and watching some great performances.

Whilst other councillors from a Party which might better suit the orange T-shirts arrived for lunch and left shortly afterwards it was good to see some real participation by our guys which seemed to be really appreciated by the children and parents. Eric’s age belies the number of hours of tennis that he plays to an incredible standard each week. His enthusiasm for all sports was apparent for all to see. Too many councillors see some of their civic duties as a chore. Looking at Eric’s beaming face the next day and hearing of his pride for the competitors, I am not sure who got most out of the weekend, the children or Eric. Well done to all three.