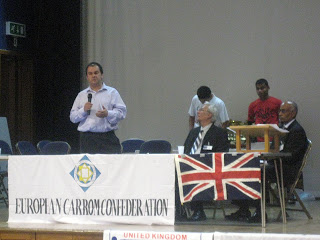 Now my computer is just about back to normal, I ought to catch up with the events of the last week or so.

I was invited to the attend the final and closing ceremony of the Carroms European Championships held at Sutton High School. If you haven’t heard of the game before, have a look at the Wikipedia entry and this simple summary of the rules. Essentially it is similar to pool but played on a board with counters which are potted by flicking a ‘striker’ instead of hitting a cue ball.

The great thing about the game is that it is easy to get into, costs very little to start and can be played by young and old, male or female, fit and unfit. My grandfather made my father a board over half a century ago, which my family still pull out and play on every now and again. Being accessible is only one test of a great game. Longevity is the other. The final was three hours of enthralling play. The skill and concentration shown by the two finalists, both from the UK was remarkable and the time flew by.

Vijay Sharma of the UK Carrom Federation was a terrific host with contestants from Italy, Holland, France, Germany and Poland amongst others. It occurs to me that with a bit of a helping hand from the Council, Vijay and his colleagues could organise some demonstrations of this compelling game in Sutton schools and encourage a few young people to take up the game. Young people often talk about not having anything to do. We respond with youth provision without truly understanding whether youths are interested in what is provided or not. Offering a choice can only be a good thing and carrom is easy, cheap and different. Well worth a crack in my book.