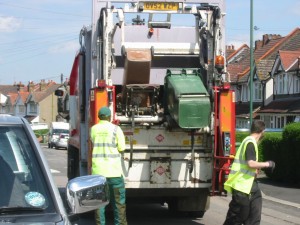 I was thinking of recycling, as you do (well, politicians and environmentalists do) and I searched for some old research that I had done into Sutton’s recycling figures a few years’ ago. I found this old photo showing a brown and green bin both being emptied into the same place after a resident had gone to the trouble of separating their rubbish and wondered what the council was doing now; if it was leading the way in reuse and recycling as many residents might think. I was surprised by what I found.

In 2002, Sutton council had the second best recycling figures in London with 28% of household waste being composted or recycled. This has gone up to 37% in the last decade, below the London average and Sutton has been overtaken by several boroughs, ending up 10th in the capital’s league table.

We have been in the 30 per cent bracket now for nearly a decade and things appear to be standing still whilst everyone around us is getting better. This council were seen as the bright young things, but they are ageing rapidly, and they have not kept up. We need to look at other boroughs and how they encourage recycling. Bexley recycle more waste than they put in landfill.

I spoke to the Sutton Guardian on this matter after they picked up a tweet of mine saying: “Look at Bexley. They have been top of the table from the start, what are they doing right? And why are we not opening a dialogue with them to find out?”

The Deputy leader of Sutton Council told the Guardian: “Recycling is only one of the tools we employ as part of a sustainable waste management system.

“Recently, our approach has been to develop other areas such as reducing the amount of waste produced by households (we are collecting less this year than last despite housing growth), promoting home composting, working with charities which collect textiles and other materials and looking at the environmental impact of our waste management services and practices.”

With the plans for the incinerator due to be considered by the council’s Development Control Committee next month, it looks like they are giving up on recycling and going to burn it instead.