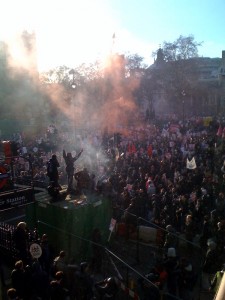 There has been a lot written about tuition fees in the last few weeks and there will be plenty more next year when the rest of the changes are brought in. At the moment the only change in regulation has been the increase in fees to £6,000pa and £9,000pa. Separate amendments will need to be made to alter the interest rates, maximum repayment period and the minimum salary before repayments are collected. Despite the protests and newspapers’ column inches, there still appears to be a lack of understanding about how the changes will affect students and why the changes are being made.

I was opposed to the original introduction of tuition fees for many of the reasons that people are now up in arms about the increase. Since that time the number of students has increased by 44%. The choice to have as many students studying fulltime for a University degree is a political one and one that seems to be set in stone. Assuming that this won’t be reversed, the original Lib Dem position of scrapping tuition fees is simply not affordable.
Neither is the status quo. The Russell Group which represents 20 of the leading Universities suggested that they may have needed to go private, should the Browne Review not have recommended an increase in fees. This would have meant that they could charge what fees they wanted and demanded them up front. The London School of Economics, despite having a reputation of being a home for left-wing firebrands and having one of the largest banners at the protests, went one step further in commissioning a report on going private which was presented to their board.
This leaves two choices, an increase in fees or a graduate tax. The latter was looked at by Vince Cable but dismissed in favour of the former. Alan Johnson, the Shadow Chancellor originally called a graduate tax ‘unworkable’ until whipped in by his fledgling leader. There are a few problems with a tax. This would be become payable at the ridiculously low salary level of £6,475pa and would remain with you for the rest of your life; far more punitive than the current system. Any other change would have been difficult to collect. A tax would not be payable if the graduate moved abroad to work and there is no link between the amount payable and the service that the student received at university. The tax would lead to the richer paying less and the poorer paying more.
So we are left with an increase in fees. There seems to be 3 main concerns.
1. Will this stop poorer people going to university?
The BBC reported that a survey by Nat West showed 40% of sixth formers saying that tuition fees made them consider not going to university. The date of this response? 13th June 1999, the summer after David Blunkett first introduced fees. Since this time student numbers have increased substantially. Although £150million has been found to reduce the amount of fees payable by the poorest 20% of the population, no parents will need to pay as fees are not payable up front, students will only pay when they earn more than £21,000pa and the monthly amount payable will be less than at present.
2. Will it affect social mobility?
Social mobility starts at school. Poorer people are often held back from going to university because they don’t get the grades at A level in the first place. We need to ensure that opportunity exists far early in a student’s life. OECD figures show graduates earn around 50% more in their lifetime than non-graduates, with female graduates earning double their counterparts who finish education at secondary level.
Allowing the money to follow the student will allow them to consider their choice of course more carefully and make the university more accountable to them as a customer. People have been concerned about the future of some institutions. However, should it be right for one London university to be able to claim £50million in funding for students that don’t exist?
The higher £9,000 tuition fee charge will only be allowed if the university can clearly demonstrate that they are taking measures to further encourage social mobility. It was interesting to note a letter in the Daily Telegraph written by 18 Vice-Chancellors and Principals, expressing their fears of the effect on social mobility should the increase in fees not go through Parliament.
Is it fair?
In a word, yes.
It is only fair to taxpayers that students make a contribution towards their education. (Education can be considered a right, but further education is exactly that; education to further one’s development).
It is only fair to students that neither they nor their parents should have to find any money up front.
It is only fair to graduates that they should pay less than at present with many being £45 pm better off.
It is only fair to poorer students that they should only pay when they start earning a reasonable income, some 40% higher than under the present system.
There has been some concern about the effect on graduates getting mortgages. The Council of Mortgage Lenders has confirmed that lenders will not take the total debt into account when considering how much to lend. Unlike a personal loan, it is very difficult to default, with payments being taken at source, it is not repayable if unemployed or taking a career break and is automatically written-off after 30 years. The only effect that it will have is that repayments reduce disposable income. This is the case at present but since repayments will be lower, graduates will have more disposable income with which to service a mortgage.
Another concern has been the timing of the introduction of the higher fee structure. This will start in 2012 for new students. Existing students will not be affected as they will have already entered a contract with the university. Similarly the repayment structure will be introduced to come in later, as the 2012 students graduate so they will be coordinated.
The actions of a significant minority of students on the protests have done them no favours. They have good reason to debate this difficult issue but it needs to be done in an informed, sensible way. Smashing windows, pulling policemen off their horses and throwing fire extinguishers from a roof into a crowd does the student’s cause no good whatsoever. Instead, they should acquaint themselves with the facts on fees from this excellent website and then let us have a grown-up debate about this important decision.