Writing about being a candidate 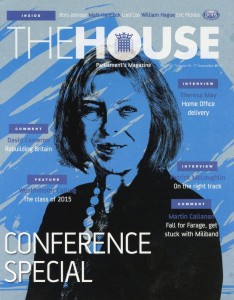 I contributed towards an article for the House Magazine, a specialist politics publication handed out during the Conservative Conference in Manchester. They asked questions about my role as a parliamentary candidate and I’ve reproduced what I said below if you’re interested to know what my thoughts are on the next 577 days.

What would you bring to the job of MP?

Most of my career to date has been running my own small business. This has given me experience of being responsible for other people’s livelihoods, the worry of keeping my head above the water in a recession and a view of life that anything is possible if you put your mind to it. My local priorities are boosting the local economy, securing excellent healthcare at St Helier hospital and across Sutton ensuring there are enough school places for local children. I am not content with simply wringing my hands and blaming people further up the political food chain but instead I want to work to get a substantial positive result for local people.

What one thing do you hope to influence / change?

At a local level, it would be to persuade my local authority that devolution of power does not come to a crashing halt at council level. Businesses in Sutton have started doing a remarkable job in revitalising the main retail centre after they voted to establish a Business Improvement District. Similarly our local secondary schools continued to excel when they all chose to move to academy status together.

This approach works on a national level too. My instinct is always for the government to get involved in people’s lives only when it needs to rather than because politicians want to be seen to look busy. Our tax system has become so complicated as successive governments overcompensate for previous changes resulting in a web of complex and opaque legislation.

What one thing must the Conservative party do to win the 2015 election?

Communicate clearly, continuing to show that they are getting the balance right when taking the tough decisions. Sensible, balanced approaches include helping parents who want to return to work whilst recognising the positive role played by a parent who stays at home; the clear offer of a referendum which should appeal to both those who want to leave and those who may want to stay in the EU; and making it always pay to work rather than live a life on benefits whilst protecting, without stigma, the most vulnerable in our society. Balance is a word that is not heard enough in political debate. It may not be exciting, but it’s the best way to win in 2015 because it’s the right thing to do.