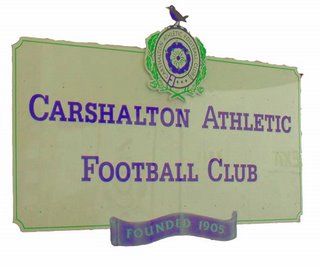 Not sure why the photo has purple writing. It didn’t when it left my PC. Maybe it’s the away logo. Anyway, Eric and I had a meeting last night with the board of directors of Carshalton Athletic and we were both impressed by the positive message that we were given. Relations between the club and its neighbours have been strained to say the least over the last few years. This boiled over when the last chairman submitted plans for a £12m redevelopment of the ground driving a road through a park next to a girls’ school, opening out onto a dangerous road and covering allotments with astroturf for floodlit pitches. Suffice to say, the Conservatives sided with the residents. The development never happened and the chairman at the time threatened to liquidate the club’s assets. Shortly after this, a new board was formed made up primarily of genuine local Robins fans. I went to the meeting when it was announced that the last chairman was off and I was optimistic about what I heard from the supporters and their intentions to bring the club back to being a local team rather than a rich man’s plaything. Their actions since have borne out this optimism. Regular meetings with residents have kept them in the loop and dealt with any complaints and misgivings quickly. There will always be a divergence of opinions between what is good for residents living on the club’s doorstep and the club itself but it is a matter of give and take. As the club has been on this ground since 1926, there can’t be too many residents that didn’t know that it was there. On the other hand, the residents should be able to enjoy the peace and tranquility of the Poet’s Estate and expect the club and supporters to respect this. It seems that this difficult balance has now been reached and long may it remain. Eric will be in regular contact with the club as Conservative Spokesman for Sport as well as ward councillor and we are often in touch with the residents in Brookfield Avenue, Mead Crescent and Shirley Avenue. Do let us know if any problems arise or if you have any questions. The chairman, Harry Driver, has offered to meet residents at anytime to tackle issues as they arise.