40 Coleridge Road To Be Flattened 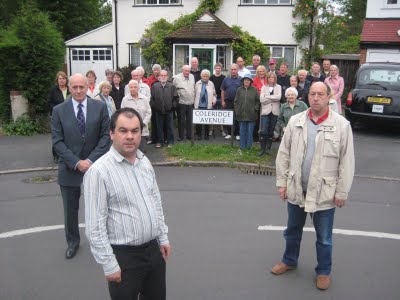 I’m not sure that I have been so appalled at a decision taken at Development Control Committee as tonight. After the fourth time of asking a planning application to demolish a perfectly good family house to build four houses in the back garden was approved after all bar one Liberal Democrat voted it through.

There were so many reasons why I feel disillusioned by the people that have run our borough for so long tonight after they demonstrated their total inadequacy tonight.

1. Two ward councillors from both political parties, both who know the area very well, spoke robustly against the application.

3. The back garden currently floods. This water will now be in someone’s front room.

4. If No. 38 decided to put up a fence, the sightlines from the new 4 houses would be totally obscured making the road a real hazard.

5. The houses are an over-intensification of the site. Planners refused to make the Poet’s Estate an Area of Special Local Character (ASLC). This is the result.

But there are three more reasons which makes my blood boil and should cause those who supported the application and let their own experienced political colleague down to hang their head in shame:

6. In May the same committee refused to take a decision on a similar application on the same site because they did not have full details of the levels of the sloping site, the flood risk, an ecological habitat survey, landscaping to the south, security, and maintenance of the drive. Today officers stated that they still did not have enough details on four of these six issues, yet the committee decided that they no longer cared enough about investigating these.

8. Probably the most ridiculous comment of the night was from Councillor Simon Wales who represents Sutton West. After declaring that the flooding issue had been dealt with to his satisfaction, he stated that he would support the application because “we have seen what happens when we go against officers’ recommendation” referring to the about-turn that the council made which will ensure a tarmac recycling plant gets sited close to houses around Beddington Lane. We have some excellent planning officers who do a difficult job, often caught in the cleft stick that is our planning framework. However this comment signalled a simple derogation of duty.

Cllr Wales, you are elected to make decisions. If officers are left to decide what our borough looks like, then you are no longer required. Give your £10,000pa allowance back to the taxpayer and go and do something more worthwhile. If you decided that this application should be granted having considered the arguments then fine but simply to rubber stamp decisions which have been taken without giving you all the facts makes you redundant as an elected representative.

I have been to many planning meetings over the last 3 years where residents have left disappointed. As a member of the committee on many occasions, I know that tough decision have to be taken on occasion, this was not one of them. We just wanted an approach that was consistent with that of the committee just six months before. Tonight I saw residents leave whose area will be changed forever by the spineless, ill-informed approach of a few.