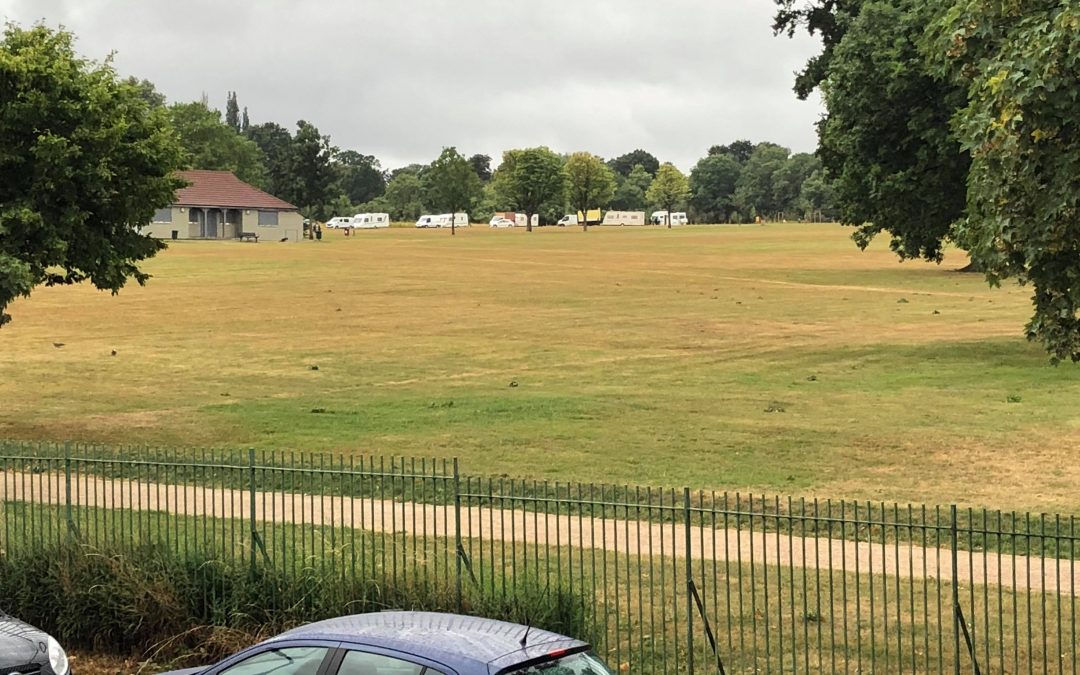 As you may be aware, travellers moved into Cheam Park late last night via Netley Close.

I am incredibly frustrated that this has happened yet again in Sutton in such a short space of time. We do not yet know if this is the same people that were on Fairlands Park.

I arrived soon after they arrived, to see what happened and see what could be done. The police arrived shortly afterwards.  I spent a couple of hours whilst the police did their checks and talked through the process with them and residents who had gathered.

It is unclear as of yet whether or not the bollard behind the gate through which they gained access was actually locked at all. The local councillors in Cheam had raised the problem of gates not being locked several weeks ago so the council and their contractor ID Verde have serious questions to answer.

As we have seen elsewhere in Sutton, travellers have little regard for locks, so it may well have made little difference. However, after the large number of incursions we’ve had in Sutton recently, I joined Conservative councillors in calling for all our parks to be properly secured to ensure no one could gain access having left Fairlands Park.

This adds to my concerns that I raised in my recent update on travellers that Sutton was becoming a soft touch on travellers and therefore an easy target: http://www.scully.org.uk/news/travellers-in-sutton/.

I joined local councillors for Cheam, Eric Allen, Elliot Colburn and Holly Ramsey who spoke to the Council last night to push for immediate action. I understand their legal team has been notified.

Recent incursions have taken about a week to move on, but I want to see this dealt with a lot faster. The travellers told the police last night that they were due to head to Brighton on Wednesday but we cannot accept this as read and so the process needs to be pushed through as soon as possible regardless.

Your local councillors have been pushing the councils to begin the process immediately today, by doing the necessary checks to allow them to begin eviction proceedings and issuing a court summons the same day. The Council have agreed to start work on this today, and I will be asking for regular updates along with the local councillors.

We have called for the installation of further security to prevent more travellers arriving, which means the process would have to start all over again. We have also asked that the police set up CCTV and regular patrols as they did at Fairlands. CCTV may be difficult because of where they are pitched at the back of the park but the police have said they will be undertaking regular patrols.

In the meantime, I would again advise residents to keep their distance and keep themselves safe. There were concerns at Fairlands Park about criminal, even violent behaviour that was reported to me, and that the police was letting it happen. However, the police state that they had little actually reported to them and they insist no-one is above the law. So I would urge everyone to properly report criminal activity they see, such as theft or assault, to the police to investigate. They will be given a Crime Reference Number and the police will look into as any other crime. I can help take up complaints with the police if it appears they have not investigated properly, but I need residents to properly report these crime first. I know that some residents had been waiting on hold having dialled 101. If it is an emergency and a crime is taking place, then call 999. If not, please do persist with 101 or speak to your local neighbourhood team. Even if there is no quick investigation, every incident builds up a picture which helps to get a stronger, wider injunction.

However, it is clear to me that we need a longer term strategy to deal with traveller incursions in Sutton. The Council failed to adequately secure our parks after the spout of recent incursions, and I believe the lead councillor needs to take direct responsibility as he was asked personally, on many occasions, to ensure that this happened.

As I said in my recent article (link above), I am supporting calls from Conservative councillors for a Borough-wide injunctions to be taken out against incursions in our open spaces, similar to those used by the London Borough of Croydon, to allow the Council to evict trespassers immediately. This will take longer to obtain than a one-off eviction, so I have asked the Council to seek both at the same time, so that they can be out of Cheam Park, whilst we try to keep them off of our open spaces for good.

In addition, I believe the law is far too vague and takes too long to evict travellers from illegal incursions. Before this round of incursions started, I had already joined colleagues in Parliament in writing to the Secretary of State for Housing, Communities and Local Government last month to support tougher laws, feeding into the government’s consultation on stricter laws on traveller incursions. This consultation is now closed and the responses are being considered, so I hope that this will result in the action we all want to see: https://www.gov.uk/government/news/government-to-review-powers-to-deal-with-unauthorised-caravan-sites.

Finally, I continue to oppose any new permanent traveller site being put near Sutton Cemetery when the Council puts together their Gypsy and Traveller Site Plan before 2023, which I am concerned they have refused to rule out so far.

I will continue to update residents as I hear more about the progress in evicting the travellers from Cheam Park.

If you have any further questions, please let me know.