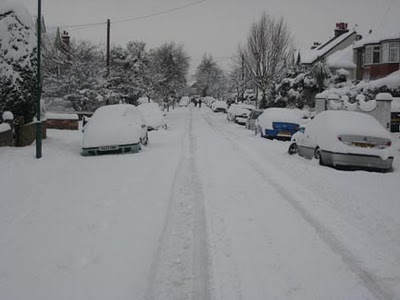 Angry residents have been hitting the phones this week with complaints to the Council reaching levels last seen when a £35 per bag charge was slapped on green garden waste collections. When the first snow arrived this week, the main roads were navigable as the gritting teams had enough warning to cover the ground. Side roads were a mixed bag.

Tuesday saw rain which had cleared much of the snow, suddenly freeze after a rapid drop in temperature. This caused chaos across the Borough with the main east-west A232 at a total standstill. People reported 2 hour journeys to get from Cheam to Carshalton. Side roads were treacherous.

Now, no gritting effort is going to remove every flake of snow and trace of ice from the highways but people have got every right to be angry when the short-sighted LibDem administration slashed the winter road maintenance budget by £20,000 AFTER last February’s snowfall which had a bigger effect than Copenhagen on people’s driving habits, as shown in the photo. This cut was made as £16,000 of taxpayers’ cash was spent on upgrading the air conditioning in the Council leader’s office.

A mere ten months later, snow returns, everywhere grinds to a halt. The gritting team have been working hard throughout. Theirs is a thankless task, working around the clock to cope and keep us moving but there is more that we can do. There are plenty of residents who would be prepared to help grit their pavements. How many grit bins would £20,000 have paid for. Whether emergency bins are put out when the warnings come or permanent ones are opened ahead of the snowfall, I don’t know. However if we are to trust people more rather than run everything from the warm and climate-controlled Council office, then we should help people to help themselves as well. Alternatively the LibDems could watch the roads freeze whilst they freeze the Council Tax just ahead of a difficult election campaign. Oh wait…!