Giving thanks to the London Air Ambulance 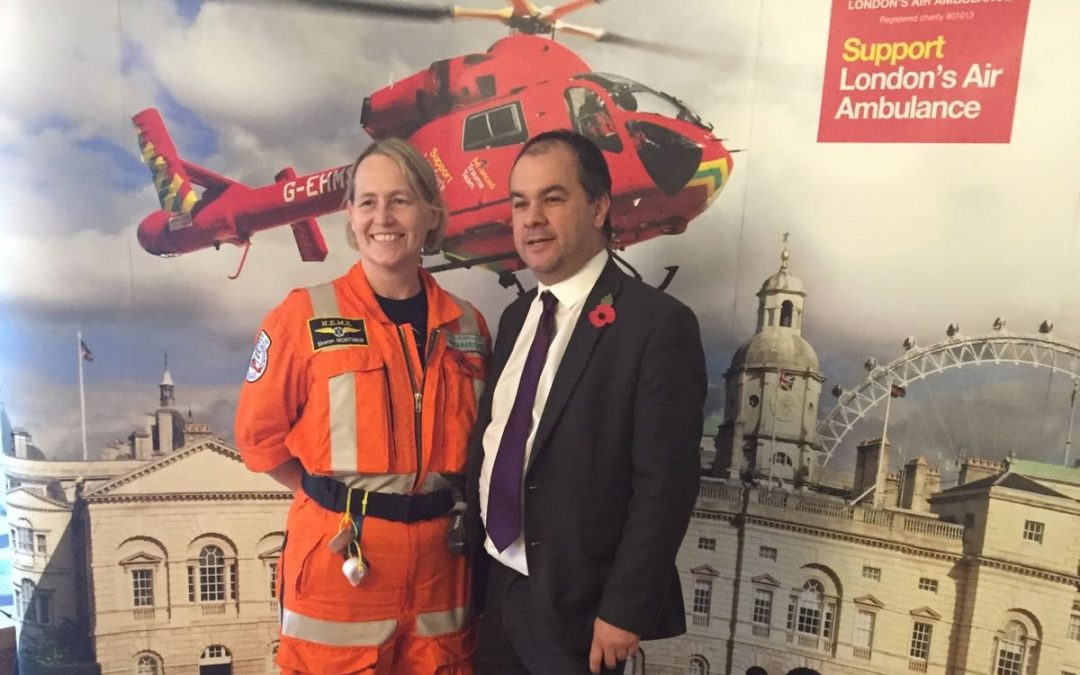 Along with MPs from across London, I have pledged support for London’s Air Ambulance, the charity that delivers a 24/7 advanced trauma team to critically injured people.

We gathered in Parliament to congratulate the charity on winning the Pride of Britain Emergency Services award. Advanced trauma doctors and paramedics also attended and set up medical demonstrations so guests could try out life-saving medical treatment on realistic dummies.

I was also able to meet the helicopter pilots, fire crew and former patients at the event.

Rushanara explained to the guests that London’s Air Ambulance had been named winner at this year’s Daily Mirror Pride of Britain Awards, which were broadcast on ITV recently. The charity was recognised for its use of a ground-breaking procedure on patient Vicky – known as REBOA (Resuscitative Endovascular Balloon Occlusion of the Aorta) – to prevent patients from bleeding to death after major trauma.  She introduced a video showing the procedure being performed on Vicky, her constituent, who also attended the reception.

Dr Anne Weaver, Emeritus Doctor with London’s Air Ambulance then spoke to the room of over 100 guests to explain why the charity plays such a crucial role, and what politicians can do to support: “Trauma is the biggest killer in under 45s, even in children.  So we deliver the hospital to the roadside, to our patients, when they need it most.  We work alongside our NHS partners, Barts Health Trust and the London Ambulance Service to improve the outcome for so many people whose deaths are preventable.

London’s Air Ambulance is there for the 10 million people who live and work in London.  As influencers in your constituencies please do what you can to help us serve London and spread the message we are a charity”.

Closing the speeches Boris Johnson urged politicians to support the charity in a call to action and thanked London’s Air Ambulance for everything they are doing to help save lives in London.

Speaking about the House of Commons event, CEO of London’s Air Ambulance, Charles Newitt said: “This was our most successful Parliamentary Reception with a high turnout of politicians from across London and across the political parties.  It was a pleasure to be able to meet with them, explain more about our charity, and receive their pledges of support”

Since the charity started in 1989, it has treated more than 35,000 patients. Sutton has a relatively low call out rate and whilst I am glad Sutton residents are keeping themselves safe, I still wanted to thank London’s Air Ambulance for all they have done.