This councillor is not for burning 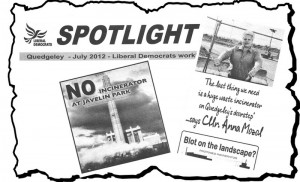 I dropped in between meetings to see the mood of the meeting. A good 200 people turned up from Sutton and Croydon and were listening intently to the arguments, though I understand that John Leach, the committee chairman who also represents the ward where the incinerator is to be sited, had already threatened to clear the public gallery.

My main concern about the incinerator has always been about the possibility of increased lorry movements in bringing rubbish in from four boroughs. This, despite there being a cheaper alternative option to take the rubbish down to Kent.

Inside Croydon has an account of the meeting which describes a worrying but not altogether surprising approach by the Liberal Democrat councillors:

“Even as he voted in favour of the Viridor scheme, John Leach, the chairman of the meeting, made some extraordinary and contradictory comments. Leach urged the opponents of the incinerator – Tories from Sutton, Labour councillors from Croydon, Green activists from across south London – to put together as big a campaign as possible to get Boris Johnson, the Mayor of London, to use his powers to block the proposal, which could otherwise see Viridor burning waste at Beddington until the year 2040, in return for £1billion in public contracts.”

You will see from the picture accompanying this post that the Liberal Democrats are not averse to saying one thing in one place and taking a different approach in another but I hope that they are not trying to use Boris Johnson as a human shield for their decision which has been some four years in the making. If they want to replace their stalling recycling programme with incineration, if they want to get free heat for local homes and if they want to make their four borough waste solution a reality then stand up for themselves and let residents judge them on that decision. People will see through cheap politics.

One particular highlight of the evening was when the Greens and Labour party members united in giving a Margaret Thatcher quote a standing ovation. Graham Whitham elicited this unique historic achievement when signing off his comments with the pithy line,  “This councillor is not for burning.”