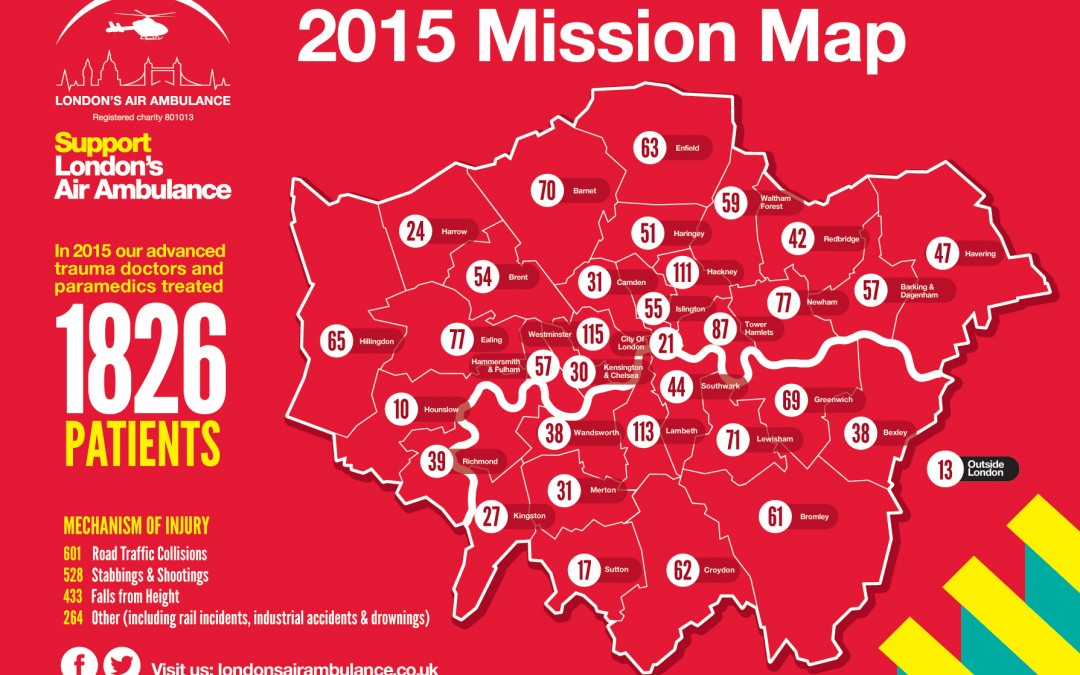 London’s Air Ambulance, the charity that delivers an advanced trauma team to critically injured people in London, treated 1,826 patients last year. The charity has released its mission statistics for 2015 today, to continue raising awareness of the work that it does 24/7 to help save lives in the capital.

The release of the London’s Air Ambulance mission statistics comes after the charity’s much needed second helicopter became operational for London last month. The G-LNDN registered MD902 Explorer is available to deliver its advanced trauma team to critically injured patients and became operational in time to cover for the charity’s first helicopter (G-EHMS) when it went offline for its annual maintenance.

I am pleased to see that there was such a small number of incidents in Sutton last year, but I still want to pay tribute to everyone who works for London’s Air Ambulance and thank them for the help they have given Sutton residents.

Graham Hodgkin, CEO of London’s Air Ambulance, said: “The charity is here to serve everyone in London. While our statistics show that we were busier in some areas of the capital than others, trauma can happen to anyone, anywhere, at any time. Trauma doesn’t have a postcode and neither do we. By releasing these statistics we are hoping to raise awareness of that fact.

“Now with two helicopters to maintain, and the extension of our daylight flying hours in the summer months, the cost of providing our service to London has increased to £6 million each year. Donations are needed now more than ever to maintain the delivery of our advanced trauma care to London, and I am urging people to please continue to support the charity, whether that’s donating, volunteering, taking part in an event or asking the organisation you work for to support us.”

London’s Air Ambulance treats on average five critically injured people in London each day, performing medical interventions at the roadside which are normally only found in a hospital emergency department. Barts Health NHS Trust provide the doctors and some financial support and the London Ambulance Service provides the paramedics and the emergency infrastructure to dispatch the service. The charity relies heavily on voluntary donations and has a world class reputation for delivering clinical innovation and excellence at the roadside. Since its inception 27 years ago, London’s Air Ambulance has treated over 34,000 patients. To find out more, you can visit their website.