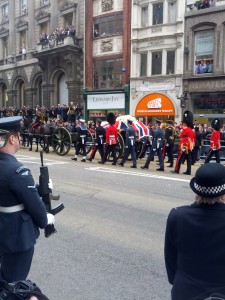 I joined many thousands of people lining the streets of London yesterday to pay my last respects to Baroness Thatcher. Standing outside the Royal Courts of Justice, we saw the gun carriage pass us just after the coffin had been transferred at the Church of St Clement Danes as shown in the snatched photo. This is the central church for the RAF and was a fitting stopover for the event which had the military centre stage.

The atmosphere was one of respect and gratitude. A couple of protestors made their point with one being put in their place by an elderly gentleman and another dressed as a miner, succumbing to the convivial atmosphere and having a souvenir photo taken with her arms around a policeman. A particularly touching moment was when spontaneous applause broke out and accompanied the procession along The Strand and Fleet Street like an aural Mexican wave. My group watched the service in a nearby pub, surely one of the few times a West End pub has had choral music blasting out of its surround sound system.

I wanted to attend for a number of reasons. Yes, this was a historic day and being a part of the pomp and ceremony that Britain does so well is very special. However this was a chance to mourn the passing of one of our greatest prime ministers and to thank her for her achievements which helped spur me on to get involved politically myself. The thousands of doors I have knocked on, the tens of thousands of leaflets that I have delivered were largely the product of my upbringing in the Thatcher years.

The wall to wall coverage has gone through the differences of opinion with a fine tooth comb. As we’re approaching Thatcheration point, I’ll leave it to others better qualified than I to write in detail about her time in office and its effects on our country. However there are two areas that I have pondered about over the last week. It is difficult for many to remember quite how bad the state of the country was in 1979 when I was aged 11. We look upon Greece and Cyprus as ‘basket cases’, but the UK was in much the same position then. People couldn’t take more than £50 of their own money out of the country when they went on holiday. To get a phone or gas cooker installed people had to wait for months. 29.5 million days were lost to strike action in 1979. It took someone with the courage of their convictions and the determination to plough through regardless to make even a small dent in the situation. It took Margaret Thatcher to smash through the system.

Another myth that has been allowed to develop is that Margaret Thatcher did not believe in society. Her speech has been quoted so far out of context but I am pleased that the Bishop of London sought to address this in his excellent sermon. The society whose existence she denied was not communities, families and groups brought together with common laws, customs and principles. It was an empty word, a lazy substitution for “someone else, anyone else” which inevitably ended up as the State that she believed had replaced the real meaning of society. That is just as true today as it was then. This is not about self-obsession, clambering over others to get what you can out of the world. It is about realising that we are all individual components in our society, our community and we all need to be playing a role and taking responsibility for what we can to keep the well-oiled machine working effectively.