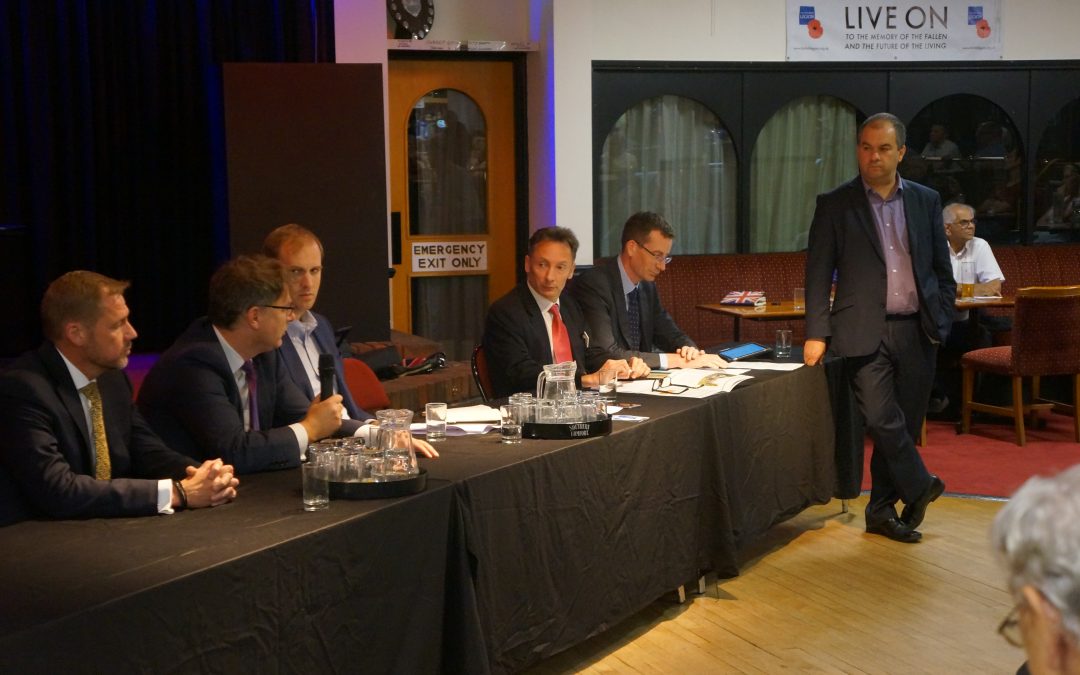 Yesterday I hosted a rail meeting in Worcester Park alongside my colleague, James Berry, the Conservative MP for Kingston and Surbiton, at the Royal British Legion Club on Central Road.

James and I were joined on the panel by some special guests:

I introduced the meeting and said a few words about what my constituents had raised with me, such as overcrowding at Worcester Park station and on the trains. 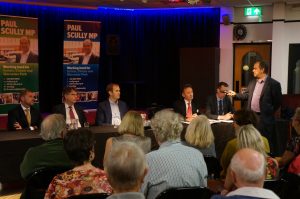 James then moved onto talking about the need to ensure the funding is there to deliver projects like Crossrail 2, to address the lack of capacity on South West Trains and the potential TfL takeover of London’s suburban rail services.

Christian took over and made the point that they are now moving 240 million passengers per year. Every morning between 100,000 and 130,000 people move through Waterloo every morning. He made the point that the biggest problem they face is lack of investment in the railway, nevertheless, they are undertaking a redevelopment of the whole of Waterloo station next August, and so a temporary timetable will be in place. The final point he touched on was the renewal of the franchise, which they are bidding on next year.

Geoff moved onto talking about the problems in London overall, especially capacity. He made the point that rail matters now more than ever before given that more and more jobs are being created in the City. The problem in trying to meet the demand has a lot to do with the infrastructure, such as old junctions and signalling, as well as trains now being fit for purpose. Overground trains just cannot turn around at a station as quickly as the Tube can. TfL are looking to take on a contractual role in managing all of London’s rail services, and looking to make positive changes to improve frequency and reliability of trains.

Chris finished up the introductory remarks by discussing how Crossrail 2 would link up Worcester Park with previously hard to reach areas of London. In terms of the affect locally, the infrastructure works would be minimal. Half of the existing services from Worcester Park would convert to Crossrail 2 and then they would add more. Trains would run to Victoria and commuters would be able to get into Tottenham Court Road in just 25 minutes. Worcester Park station will benefit with being rebranded and upgraded, and a public consultation on Crossrail 2 will begin next month.

I then opened up questions to the floor and there were several themes that came up in the questions that were asked. Unsurprisingly, one of the most common themes 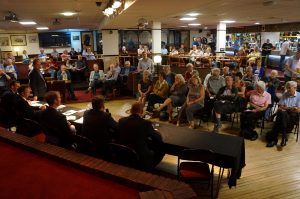 related to overcrowding and the frequency of rail services. Christian and Arthur informed the audience that at peak times, all available rolling stock is used. They have new rolling stock coming in soon and 10 carriage trains will be rolled out in December 2017. The bid for the next franchise and Waterloo upgrade will also allow for extra capacity. Geoff also told the audience that they will benefit from up to a possible 8 Crossrail 2 trains an hour, and Chris elaborated on TfL’s plans to modernise the railway infrastructure to allow for faster turnaround of trains.

Station skipping also came up a lot in the questions. Christian and Arthur admitted that this does occur, but only to maintain the free flow of rail services. Otherwise subsequent trains would be delayed and commuters would lose up to two trains an hour, so unfortunately, station skipping becomes necessary. However, their plans for the next franchise include improving information on platforms and on the trains, so customer are better informed of alterations to their services.

Finally, there were questions about the level of disruption customers were going to have to face when Waterloo gets upgraded, in addition to Crossrail 2 being rolled out. Christian and Arthur advised that there was never a good time to close stations at Waterloo, but the time has come to bite the bullet and go ahead with big upgrade projects, which are needed to improve these services. The old Eurostar terminal at Waterloo will operate while Platforms 1-4 are closed to try and mitigate the disruption. Chris reassured residents that disruption in terms of Crossrail 2 will be minimal for Worcester Park. 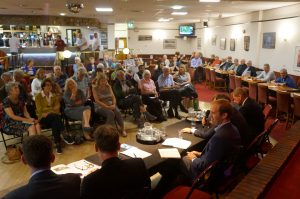 I want to thank all the guests for coming to answer questions from residents’. I think the meeting was very positive, and I was pleased to hear some residents’ had positive feedback about the service provided by South West Trains.

We were also lucky to have neighbouring MP and Secretary of State for Transport, Chris Grayling, in the audience and I hope he found the comments useful to feed into the hard work he is doing to improve rail services in the country.

There is a lot to follow-up on from the meeting and attached is a spreadsheet of all the questions that were asked, in addition to the answers that were given.

I also want to say a big thank you to the Royal British Legion for hosting us and especially to the residents who came along and made their views known to the panel.