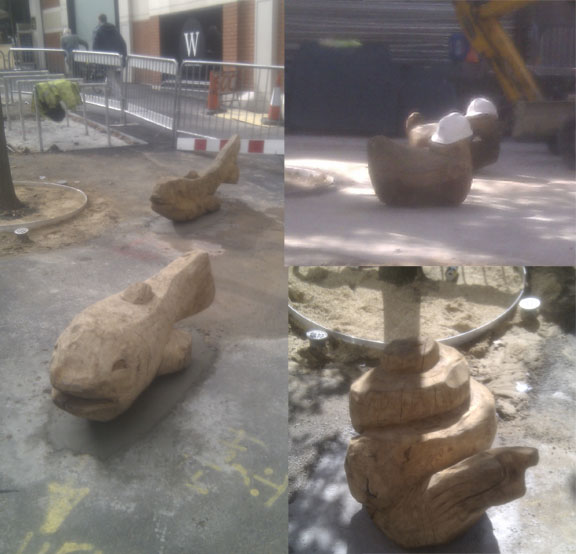 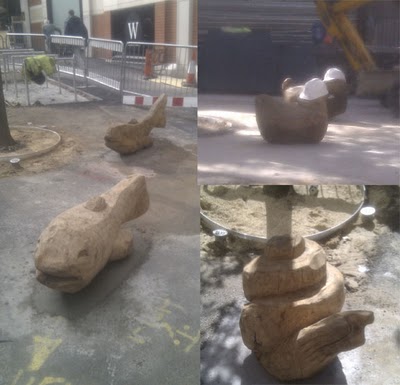 From the Council which gave you £25k totem poles sited opposite a cash-strapped hospital, comes the latest wheeze in how to spray taxpayers’ money around on ‘art’.

The wooden menagerie pictured opposite has been concreted into the pavement on Sutton High Street where there was previously an open space. The metal globe sculpture has been relocated so that people avoiding the wooden fish to go to All Bar One and the Civic Office crash straight into it.

Lest we forget within the apparent benefits for this £3million splurge of your cash was the statement “Wider footways, better road crossings and less clutter will create a people-friendly zone.”

I’m not sure that mocking laughter was the reaction first envisaged by the Lib Dem Council cabinet who approved this project, but that is what appears to be the first reaction of those walking by.

We are still waiting for the ‘green wall’ to be installed on the face of Wilkinsons, which involves a lawn to be laid vertically up the front of the shop. When challenged over such expenditure, the Lib Dem administration claim that the £3million would have just be spent in another borough. That’s just not good enough. Whilst we all reevaluate the services that we receive and our own personal incomes as a result of the massive deficit created over the last few years, it is not acceptable for councillors to spend such amounts on needless projects. How many wooden fish will it take to fill one of the many empty shops on the High Street? How will a grass curtain on the front of one of the busier shops on the High Street help the hot dog seller that is being thrown off the pitch that she has held for the last 15 years? The north end of the High Street will remain largely a ghost town, with the lion’s share of the investment within yards of the Civic Offices. It is a case of out of sight, out of mind for the councillors that have been embolden by their win at the last election leaving them another four years to rack up the bills for Sutton’s taxpayers.

Leaving on a largely positive note, I am glad that another one of the Conservative manifesto commitments was adopted by siting recycling bins next to normal bins along the High Street. It’s just a shame that the brushed metal used makes them look a decade old already.