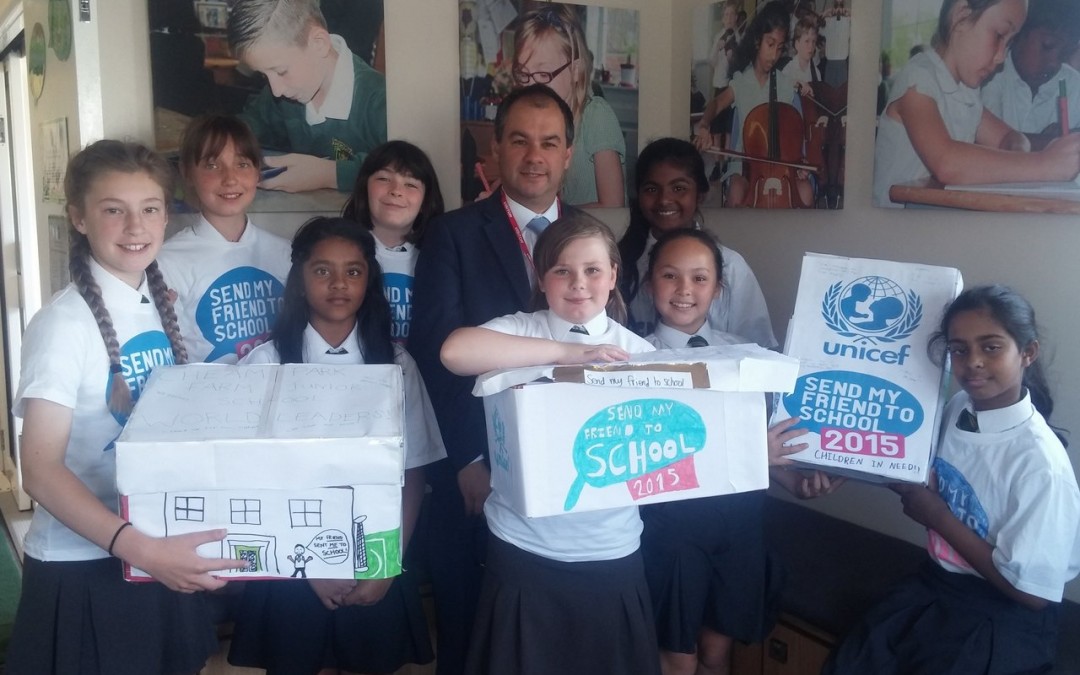 Last week I had the pleasure of visiting Cheam Park Farm Junior School where pupils shared with me three boxes of messages to pass onto the Prime Minister. They are supporting the Send My Friend to School campaign which seeks greater access to a free education for children around the world. 58 million children around the world are missing out on an education. We have a role to play for a number of reasons.

Firstly, as one of the world’s biggest economies with excellent educational opportunities we have a moral responsibility to help those less fortunate than us. However there are key benefits to this country. Allowing children to develop skills and the ability to take opportunities in their own country reduces the need to migrate elsewhere and retains that skilled labour which will help build that nation’s economy. This will also give us more avenues to trade with that country. One of the first things dictatorships do is to run down the education system which makes it far easier to subjugate the people. Eighty years ago, Burma had one of the best educated population in that region. This has been allowed to wither over time, denying young people a future and making them dependent on the state. Probably the best known example of seeking to deny an education is that in Pakistan when the Taliban shot Malala Yousafzai on her way to school.

The children in Cheam Park Farm were really inspired by the work that they had done on the project, realising the privilege that they enjoyed of a great start in life through school. I haven’t had a chance to present the boxes to the Prime Minister as you might imagine with the incredibly difficult news that is coming from a number of fronts but I did get a chance to raise their campaign in Parliament, speaking to the Leader of the House:

Paul Scully (Sutton and Cheam) (Con): At their school assembly yesterday, the pupils of Cheam Park Farm junior school gave me several messages in support of the Send my Friend to School campaign. May we have a debate to discuss how this Government can help in the objective of making free education available to more children around the world?

Chris Grayling: I commend the teachers at Cheam Park Farm junior school for their work in raising awareness and helping their pupils to raise their concerns.

My hon. Friend can look those pupils in the eye and say that this Government have an excellent record in providing financial support through our international aid budget to those parts of the world where young people do not have adequate access to education or, indeed, other basic needs in life, such as clean food and water. We are doing everything we can internationally to help the development of those communities, and those young people should feel proud to be part of a country that is doing its bit in the world.

I’m pleased that the Leader of the House recognised the teachers and pupils for their work in this area and I’ll continue to help push their message to those that need to hear.