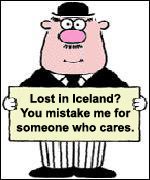 I was talking to a member of my family after the demise of Icesave, the UK trading arm of Icelandic bank Landsbanki. He is self employed and asked a pertinent question that hasn’t been raised until now.

We know that individual depositors have been guaranteed their money back which is good. European legislation states that bank compensation schemes should pay out within 3 months which is also good.

However what about self-employed people that have set money aside to pay their tax bill? What happens if they haven’t been refunded their money by then? Will HM Revenue and Customs come running after them?

The answer seems to be yes. Shailesh Vara MP, Shadow Deputy Leader of the House, asked this very question to the Chancellor. A junior minister replied that you may be able to arrange an extension but will be charged a ‘competitive’ interest rate.

It is important to note that Shailesh Vara has exposed another bit of disjointed thinking by the Government. Landsbanki is only in administration not liquidation. There is a subtle but vast difference between the two, not least because the compensation scheme doesn’t even start until the latter occurs. The latest statement on the Icesave website explains that the process will start on or around November 3rd. If the Government pull their finger out, we might not need to get to the position when we see the effects of this problem. However, I’m a sceptical old Hector by nature when it comes to Government wheels turning. The three months won’t be up until 3rd of February if the process even starts on time. We’ll see.