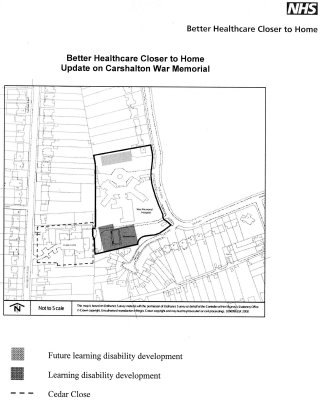 I’ve come across a map which may be helpful for residents living near the War Memorial to show what the NHS have planned for the site. Click on the photo to enlarge it.

The site has been split into three for administrative purposes.

It is assumed that the land sold will be for residential. Since there will be no plans until developers get interested in the land, everything is based on best guess. I can envisage either two cul-de-sacs or one road joining The Park and Salisbury Road. Since the area lies in between a low-density housing area and a Conservation Area, there will be limits on what development can be acheived on this site, so we are afforded some protection as neighbours. (I live opposite Cedar Close on Salisbury Road, so this will directly affect me too.)

In the meantime, the battle to keep the land available for public use continues. Local Conservative Parliamentary Candidate, Ken Andrew has collected a substantial petition demonstrating public support for his campaign to save the hospital and will be holding a public meeting -details to follow. You can also still join the Facebook Group “Save Carshalton War Memorial Hospital”.