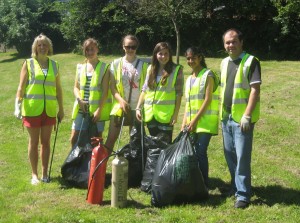 Last Sunday, I led a group of local students to clear a Carshalton school sports pitch of rubbish.

The four Year 8 pupils from Wallington High School for Girls helped me clear the Camden Junior pitch in Carshalton in order to show that they were active in their community for a school project, collecting several large bags of rubbish and 2 fire extinguishers along the way.

In my role as Chair of Governors at Camden, I’m aware that the Junior School haven’t got the resources to clear up the mess that arises from being next to Grove Park. Making connections like this brings people together to ensure that everyone benefits.

I hope the girls will be a great example for others that just a little work from everyone in the community has a big effect on the area in which we live. Sutton Conservatives are starting a programme of social action working on a range of environmental, voluntary sector and community projects. If anyone can help me with time, money, expertise or just enthusiasm, then do please leave a comment.

Boris has started his Mayoral term at a canter. With sweeping changes in City Hall and initiatives to make good his election pledges of making our streets and transport safer and City Hall more accountable, he has built up quite a head of steam.

One announcement that was made today gathered little attention but will be welcomed by many. According to the Evening Standard, traffic lights are going to be rephased across the capital to ease congestion on busy roads. More cars will be allowed through on each green phase. Although this will mean a slightly longer wait for pedestrians, it will also allow them a longer crossing time which will improve safety.

Boris said, “I do want to make sure that traffic flows more smoothly in London. I think we can do that without any prejudice to the rights and needs of pedestrians or vulnerable road-users.

“I’ve discovered an appalling legacy of neglect of London’s traffic lights and it turns out that, contrary to the so-called green credentials of the last admin, there are no fewer than 727 traffic lights that do not conform to Department for Transport guidelines.

“Poor pedestrians are now being forced to sprint across. I’m assured we can not only rectify the gross neglect of traffic lights but we can also allow cars to flow more smoothly through them.”

Fortunately the picture is of a sculpture in Canary Wharf so he won’t have to spend anytime untangling that pretty mess. I hope one of his first lights for consideration is at the Windsor Castle junction in Carshalton. That way, they might be able to introduce a pedestrian phase without the ridiculous proposals of banning various manoeuvres, thus sending cars rat-running up Carshalton Park Road and Salisbury Road.