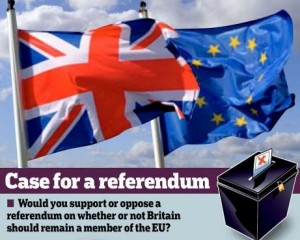 Today I had a letter published in the Sutton Guardian, welcoming the referendum pledge by the Prime Minister and setting out my views. Here’s the full text:

“Eight out of ten people in the UK want to have their say in the UK’s future relationship with the EU.

We now have the first real commitment in forty years to have an in/out referendum which should not be dismissed (Letters 14th February).

Unlike the Prime Minister my default position is to leave the EU unless I can be persuaded that renegotiated terms are of significant benefit to this country. Such a renegotiation will undoubtedly be tough but not impossible. Few believed that David Cameron would lead the way in securing the first budget cut in the history of the EU; but he did.

Pragmatists on both sides of the European debate will understand why such a referendum has to be held after the next election. We have a coalition government. The Liberal Democrat shift from wanting a referendum in 2010 to rejecting the idea now makes the necessary legislation impossible to get through Parliament.

UKIP has chimed with a section of the public as a pressure group but as a party, risks pushing the country further away from its stated aims by helping to usher in a return to government by the people who negotiated the Lisbon Treaty, lost control of our immigration system and ran up a huge bill for our children to pay back in decades to come.

I know that when the referendum comes, the answer will impact on this country for at least the next 40 years. With polls swinging either side of the 50/50 mark as to whether to leave or remain, we need to make sure that the public has a clear understanding of the options and we simply have to get that answer right.”

Whatever your view, I believe that this is a sensible pragmatic approach to ensure that we actually see some action. Yes, it means that we’ve got to secure an outright Conservative majority in 2015 but as David Cameron is the only leader promising a referendum that would be true at any given point in time. Whether you favour staying in the EU believing that it is important to be part of the biggest trading bloc in the world or want to leave, taking the view that Britain could and should establish trading links with other economies, reconnect with the Commonwealth countries and can forge a new relationship with Europe, David Cameron’s promise is the only way that you are going to get a say in the matter. It’s worth a short wait and the work involved. It’s not before time.