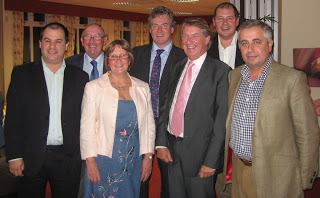 Peter is the Shadow Secretary for Environment, Food and Rural Affairs – not many ministries have snappy titles- and so has a strangely diverse portfolio from Climate Change to nuclear waste, Foot and Mouth to fishing.

In a Question and Answer session, Peter told us that that the Lisbon Treaty was a dead treaty having failed to be ratified by Ireland. He explained that aviation emissions need to be looked at in the context of Heathrow expansion as it is one of the fastest growing sources. He also supported carbon capture in the North Sea as a mitigation for emissions caused by energy generation. Peter was in a buoyant mood despite arriving on a crutch due to a sporting injury, optimistic about the future of the party and looking forward to serving the country in Government.