My conversations with Rohingya refugees 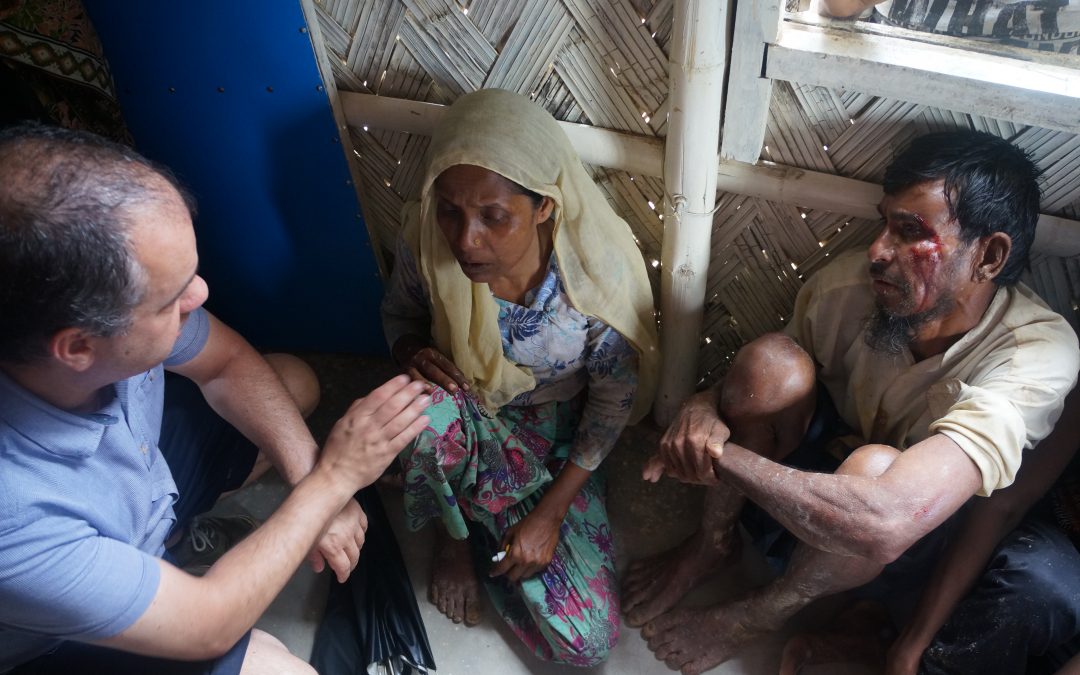 (This article originally appeared in the Times Red Box (paywall))

While the pressure from the international community has been intensifying on Myanmar, the border with Bangladesh remains a treacherous and congested route to safety for thousands of Rohingya fleeing for their lives.

As part of a week of social action with the Conservative Friends of Bangladesh, I have spent time with MPs and volunteers in and around the camps in Cox’s Bazar speaking to people who have been displaced from their burnt-out villages, aid workers and Bangladeshi government ministers.

One was a 60-year-old lady in Kutupalong refugee camp, holding her grandchild. Her son-in-law had been stabbed in front of them. Village children were beheaded. Other young boys had their genitals mutilated, suggesting that this was to stop the Rohingya population reproducing. In one of many health clinics at the camp, seeing an old man being treated for a deep gash, a young man was then brought in on a makeshift stretcher with blood pouring from his head. A family member told me that they were eating earlier that morning in Burma when they were attacked by men with axes and machetes. They escaped across the border and got treatment within hours at the camp.

Three days of solid rain have made the route across the border even more perilous. When we visited the Gundhum border area yesterday, 5,000 refugees were camping on a river bank in a designated “no man’s land” between Burma and Bangladesh, able to ford the river to get food. Arriving today after 24 hours of stormy weather, we saw a body being dragged out of the surging river which had risen by at least six feet.

A Bangladeshi soldier manning the border was frank, telling us how he had seen Burmese military digging there the previous week and drones being flown over the trees filming the refugees from the Burmese side. He had video of a lady who had lost her leg after stepping on a landmine four days before.

This is what the Bangladeshi authorities are having to deal with each day. Five thousand refugees are registering in Kutapalong every day. The Bangladeshi government has just allocated another 2,000 acres for the camp to expand. The area was so big, a lady with an ill four-year-old child was refusing to seek treatment because she was waiting for her husband who had gone to Cox’s Bazar to look for work. She feared that he would not be able to find them again in the sprawl.

There are 80,000 pregnant women in Cox’s Bazar and 13,000 orphans. Doctors said that they were treating mainly diarrhoea and malnutrition but saw several gunshot wounds. The authorities had taken to driving vans with loudhailers encouraging people to register so that they could get the help they needed. We saw makeshift camps that had become flooded. Even in the camps, 100 houses had been swept away in a landslide. As the forest is cut back further to provide more land for shelter, the bare earth is exposed to the heavy rain.

The authorities and NGOs are at breaking point but are working incredibly hard. They are reacting to a fast-moving situation with 420,000 refugees descending on a small, hard-pressed region. We saw the Union flag symbolising the contribution of UK Aid through the department for international development; the UN refugee agency, the International Organisation on Migrants; US Aid as well as support from Turkey and Saudi Arabia, all trying to cope with this man-made crisis exacerbated by terrible weather conditions.

Their worst-case scenario is that all 1.3 million Rohingya come over the border, the best is that the Burmese military stops its disproportionate response to attacks from the minority militant group ARSA and support those who have lived in Myanmar for generations. There may be some instances of civil uprising. If there is, no one with any value for life can think the answer is the mass eradication of a whole community through such barbaric methods.

Although the violence has escalated, this is not a new problem. Kutapalong has been a camp for displaced people for at least two decades. We did need to hear stronger words from Aung San Suu Kyi, Burma’s state counsellor, in her speech this week but she is also right that the country needs to be looked at as a whole.

Terrible crimes against humanity have occurred in nearly every state in Burma over the past seven decades and the peace process is having an effect in many parts. The country has just seen the first chink of light with a return to being part of the international community once more. Side-lining Ms Suu Kyi at this stage risks that light being extinguished and a return to full military rule with little reporting of the atrocities that will surely continue.

The commander in chief, General Min Aung Hlaing, is the man who can stop this today. I hope that Britain will take a lead on drawing international attention to him with a view to bringing this dark chapter of Burmese history to an end so that the Rohingya community can return to its safe homeland and Myanmar can continue its journey of development. Alongside this, we must remember the humanity and daily struggle of these victims on both sides of the border.