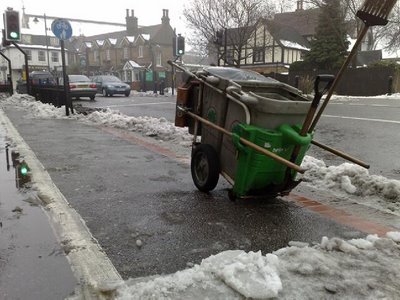 A near-neigbour sent me a message earlier today having seen a beat sweeper armed with a brush, tackling a road in Carshalton. Not unreasonably he and I question why someone has been sent out on a normal sweeping round to clean a road buried under 6 inches of snow and ice.

The photo is of a barrow belonging to a council employee who was clearing snow from the main roads in the Village. I don’t suppose the brush was our friend’s weapon of choice which begs the question why he was sent out in the first place.

Update: Just to clarify, the barrow pictured above was elsewhere in Carshalton. I have had the technique used to clear snow from pavements explained to me. The shovel is used to break up the snow. Grit is also contained in the front compartment. The sweepers then use the back of their brush to push the slush and ice to the side.