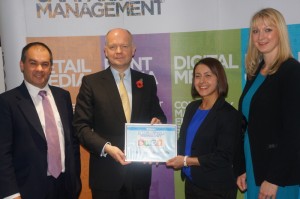 I was delighted to welcome William Hague to Sutton on Friday. The Foreign Secretary met a number of representatives from Sutton businesses both big and small to discuss how we can attract global businesses to Sutton whilst maintaining our identity with a rich selection of small, local shops and businesses. We were hosted by HH Global, a local success story. This company started off as a local printers expanding quickly after moving into outsourcing the entire management of printing and brand development for several big companies. Now HH Global operates in more than 50 countries around the world with a turnover of some £1oo m.

We were joined by giants like Reed Elsevier, Subsea 7, G4S and Crown Agents, all global businesses with a significant HQ in Sutton. However we also had smaller start-ups like Sense Communications who have 5 employees looking after some significant PR contracts after only a couple of years trading and I was delighted that Kate and Mary from Precision Chiropractic were able to join us as one of the representatives of small High Street businesses. The timing was perfect for them to receive their certificate from the former Conservative Party Leader having just been named as the Sutton, Cheam & Worcester Park Shop of the Year 2013.

William and I then dropped in on the Sports Village near Rosehill to see another hidden jewel in Sutton’s crown. Keith and James Sohl and colleagues have done an excellent job of building a sports facility that has a global reach. Their tennis facilities are used by several players in the build up to Wimbledon and there are ties with a number of local schools. Budding young players from countries like China are able to study and practice at the Village bringing a significant boost to the local economy including hotels and our shops. It’s only a shame that the council have seen fit to drop on them a 400% rate increase, having previously relocated the teaching of citizenship classes from their to the controversial £8.5m Sutton Life Centre. Local authorities have to ensure that businesses sit well with residents’ priorities but they also need to allow business people to do what they do best, respond to need and demand.