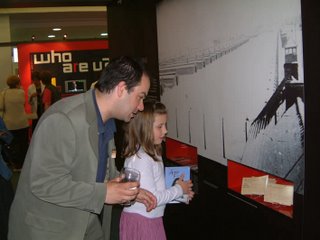 Last night, my 8 year old daughter and I attended the opening of the “Anne Frank & You” exhibition in Sutton Library. The exhibition was a major coup for the Borough and a testament to the retiring Head of Library Services Trevor Knight OBE, as it is in great demand and so only makes it to a few UK cities each year.

It is aimed at teenagers, though Josie punched the air when her older brother was too ill to accompany me as she had studied Anne Frank at school. Anne’s story is familiar to many of us and has been an inspiration to generations following the Holocaust. The exhibition breathes new life into the memories of a teenager balancing a normal teenage life with friends and boyfriends with the horrors of the age, hiding for two years in an annexe in the house in Amsterdam. Photos taken by her father and stepsister provide a remarkable archive, something taken for granted today but a rare view of those years.

Eva Schloss, Anne’s stepsister opened the exhibition adding a further insight into the desperation and anguish suffered by so many Jews, though the exhibition itself moves further in drawing parallels with modern-day conflicts such as Ireland and Darfur.

The exhibition is free and in Sutton for a month. If you have the opportunity, take it, enjoy it. You cannot fail to be moved.