Islamism is not Islam 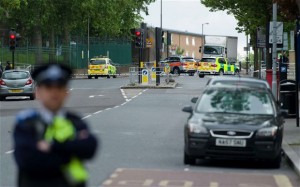 London was rocked yesterday by the act of sheer barbarism that took place on a street in Woolwich yesterday in broad daylight. The brutal murder of an innocent man and the calm way that everything was filmed have achieved the murderers’ aim of getting the nation’s attention. The Prime Minister is flying back to the UK. A meeting of COBRA has been held and the Mayor of London’s diary has been cleared for the day, all ready for action.

The most evocative image was that of a man ranting into a camera, his blood-soaked hands still carrying the weapons that he had used in his savage act. But I don’t want that image anywhere near my blog. I don’t want the eyes of a man whose views and actions are so far removed from the people he purports to speak for and speaks to looking out onto readers, so a picture of the police presence will suffice.

I hope and suspect that this is a ‘lone wolf incident’ but we will see. It is important to remain calm and not rush to too many assumptions until the facts are clear. How the government responds and how society responds is key. Already a man is under arrest in Essex after reportedly walking into a mosque in Braintree with a knife and incendiary device. Members of the English Defence League (EDL) have thrown missiles at police in Woolwich. Comments on social media are flying around without thought.

There are around 3 million Muslims in the UK. the vast majority of whom would condemn this killing without reservation. It is un-Islamic, as unthinkable to mainstream Muslims as it is to people from other faiths. Islamism is not the same as Islam. The -ism is significant, politicising an old religion, distorting its teaching beyond recognition. People will be fearful around London and the country as is to be expected after any terrorist act but let us remember that many Muslims will also feel under siege this morning. What had a mosque in Braintree into which a flare was thrown got to do with these men? How does the EDL throwing missiles on the very people whose colleagues shot the murderers earlier that night keep us safe from extremism?

In amongst the horror, there have been some truly breathtaking acts of bravery. Read the Telegraph’s account of how Cub scout leader Ingrid Loyau-Kennett got off a passing bus to help the victim and ended up talking down the murderers so that they did not attack anyone else and how others shielded the body to prevent further abuse. Mother of two, Ingrid’s story absolutely floored me when I read it, walking directly into harm’s way and remaining there when it became clear that anything could happen is remarkable. That response leads the way for all. Extremism has no place in society, foreign extremists have no place in this country but let us look at this for what it is, a mindless, savage act that represents a small number of evil men.