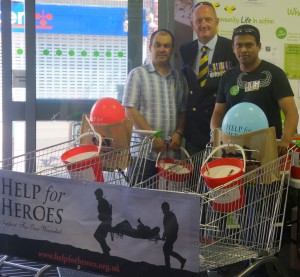 Thank you to all of you who bought wristbands, keyrings, bags or just donated money at Asda over the weekend. You have raised a magnificent £1,800 for Help for Heroes. I have raised money for a number of causes over the years but Help for Heroes strikes a particular chord with people who are generous to a tee and give freely. We were joined by Sergeant Major Mark “Lofty” Taylor. Anyone who met Lofty could not have failed to be impressed by the man,dressed up in his medals on the Sunday, sharing his story of how Help for Heroes helped him deal with his Post Traumatic Stress Disorder at their Tedworth House recovery centre and being an amazing ambassador for the charity.

My Nudge Factory business partner Az and I organised this as part of our company’s community work but it was great to be joined by friends from across the borough who are always happy to help such a worthwhile cause. Lofty explained how Help for Heroes was not politically affiliated in any way, making no judgement on the politics of the battlefield. Instead they are there solely to concentrate on rebuilding the lives of those who return. As someone supported by the charity, Lofty is a member of the Band of Brothers and travels around telling people about the amazing work carried out using your donations. The charity is very lean. Donations are treated like any other charity with gift aid enhancing the money raised. Merchandise sold goes through a trading company, Help for Heroes Trading Co Ltd which is making enough to cover all overheads and provide donations to the charity. It is running at 106% efficiency.

All of the merchandise was sold including the wristband from my arm and our own bag such was the demand. If you were unable to buy what you wanted the whole range of merchandise is available at the Help for Heroes website here.  I’ll leave an update confirming the final total which is still coming in after a couple of last minute pledges.